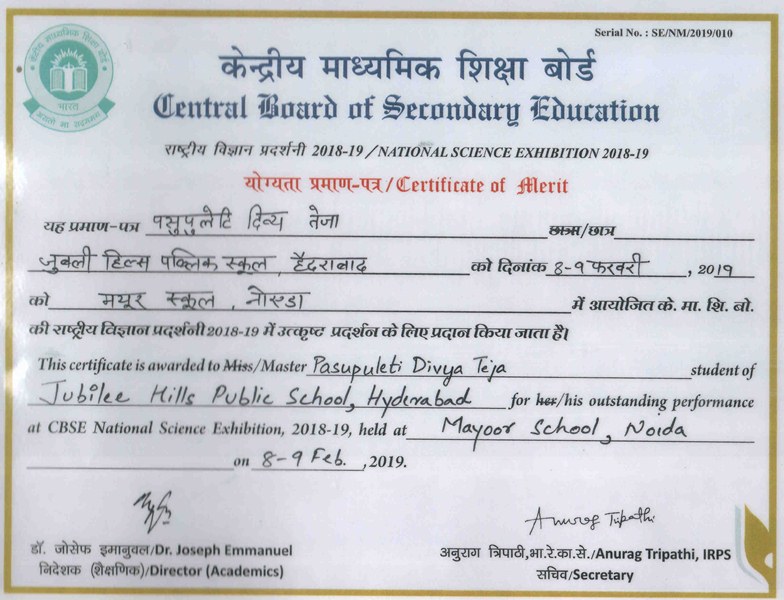 Young Innovators Divyateja Pasupuleti and Nikhil Patnaik of Grade 10 made the school and entire Telangana proud when they won a first prize in CBSE National Level Science Exhibition, held at Mayoor Public School, Noida. Their innovation of an Advanced Rescue System called ‘Waviour’ helps rescue people during floods. A drone continuously takes photos up to a depth of 6m and sends the requisite coordinates to zero in on the location of the person drowning. The coordinates are sent to the nearest coastguard as well as the person who deploys the drone thereby saving precious time. This technology can be utilized during natural calamities as well as in the sea or ocean.This Rescue System has also won the young innovator Divyateja the prized first place in Rural Innovators Startup Conclave competition held by National Institute of Rural Development. The School Management appreciated the students’ efforts and felicitated them and also their mentor Mr. Gangadhar with a Cash Prize in the School Assembly. 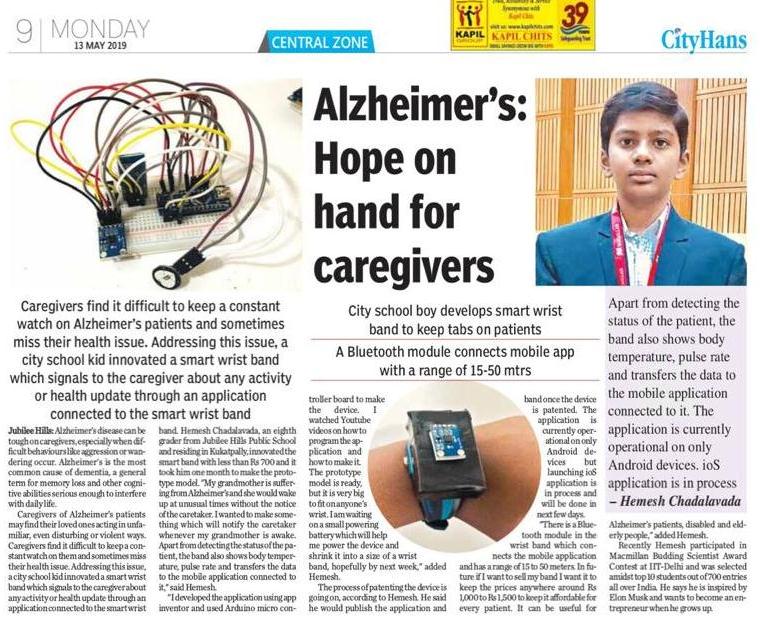 Hemesh – Grade VIII
Hemesh another Young Innovator made the school proud when his innovation A Smart Wristband was put up in TSIC Portal in Intinta Young Innovator and also in the e-paper Hans India. This Wristband was developed by him for his grandmother who suffers from Alzheimer’s. This has been made to monitor the body temperature, pulse rate and the status of the person whether he/she is awake or asleep with the help of MPU6050 Accelerometer module. The temperature and pulse rate are monitored with the respective sensors. The data received by the sensors is sent to the caretaker’s phone via a Bluetooth. This Innovation has won him many accolades.

Along with his innovation he has innovated and made a few more devices which include a Smart Pill Dispensing Robot which reminds and dispenses the right medicine at the right time. Another Innovation of his is a Self-Heating Tiffin-Box which he made to help himself as well as the school going children whose lunch tends to get cold by the time they eat. He made this tiffin box such that he can heat the food without the help of electricity and eat piping hot homemade food when necessary. This Award made him stand tall as a finalist in the Macmillan Budding Scientist Award at Delhi. He has also been selected for Phase II competition of Ideate for India conducted by National e- Governance Division, Govt. of India. He stood third among the top 10 selected from the state of Telangana. 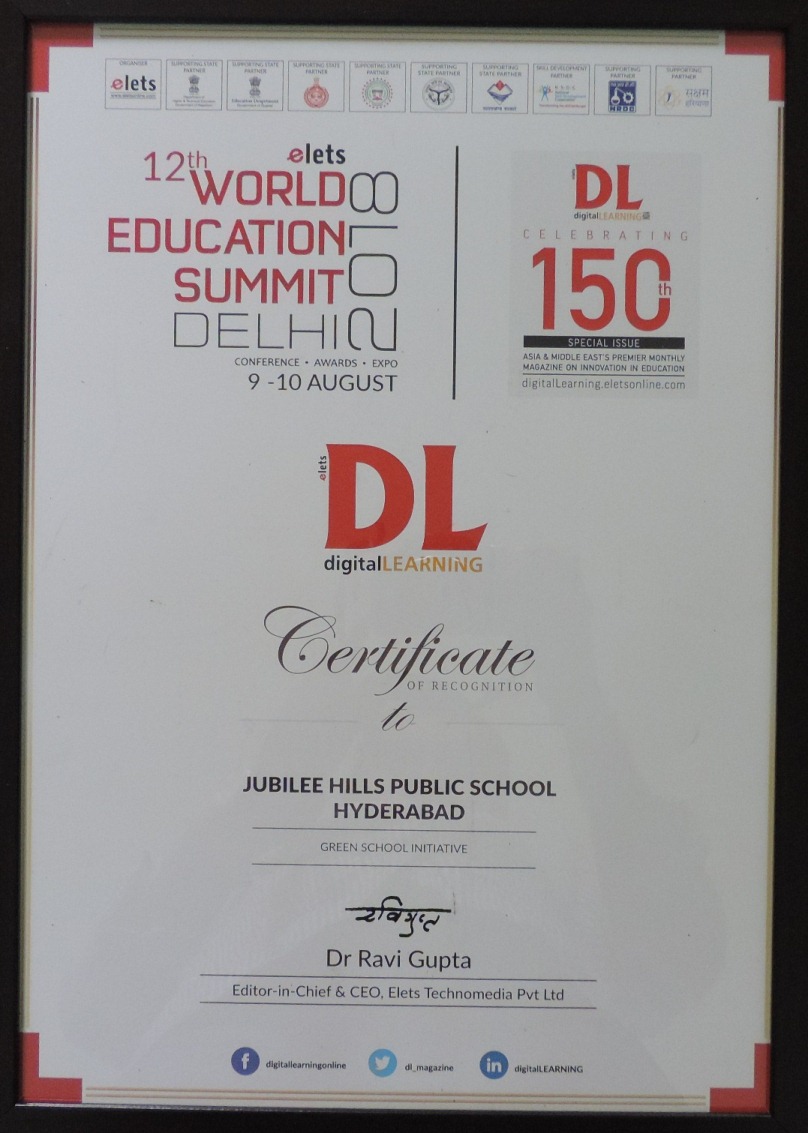 Jubilee Hills Public School bagged the “Green School Initiative Award 2018″ in a recent survey conducted by Asia’s premier magazine, Digital Learning. The award was given on the basis of a detailed assessment of environment – friendly practices such as 1000 KWs solar power, rainwater harvesting, proportion of green area in school, waste management and sanitation practices.

Jubilee Hills Public School educates its students about the optimal usage of the non-renewable resources and how one can use the resources which are renewable without penalising the environment. The school has been determined to keep pace with the environment friendly practices and leads its students in the same way. The award was received by the Principal, Ms M. Varalakshmi at the 12th World Education Summit, 2018 organized at New Delhi on 10th August.

Jubilee Hills Public School won the “Keep Going, Keep Growing Award” for LearnStorm-2018 conducted by Khan Academy. Around 2000 teachers and 30,000 students from all over India participated in the competition. 27 Sections from Classes V, VI, VII and VIII with 1040 students and 16 teachers participated from Jubilee Hills Public School. This competition celebrated the spirit of learning the subject Mathematics that would help build the students growth mind-sets. 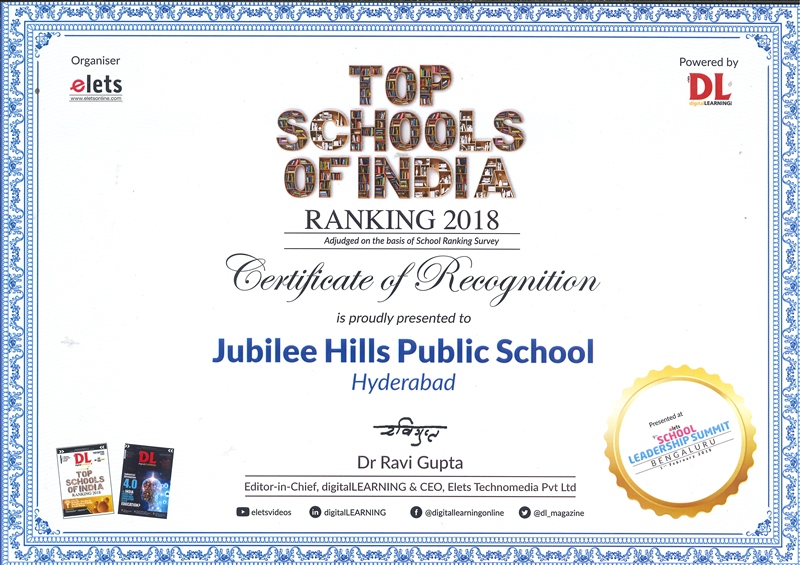 Jubilee Hills Public School garnered yet another feather in its cap when it was awarded a certificate of recognition with the ‘Top Schools of India Award-Ranking 2018’ by Digital Learning, Elets Technomedia Pvt. Ltd at The School Leadership Summit held at Bengaluru on 1st February, 2019. The Principal, Ms. M. Varalakshmi received the award and was also a speaker at the summit.

Jubilee Hills Public School has been a pioneer in the field of education for more than 30 years. Surging ahead with its motto ‘tradition and technology’, Jubilee Hills Public School has been at the forefront introducing the new techniques and technology associated with traditional education to its students on a timely basis. The latest technological facilities made available to the students include a 3D Lab, a Tab Lab for the exclusive usage of Khan Academy taken up by the school to reiterate their students mathematics concepts, a top of the notch Atal Tinkering lab where the budding scientists keep tinkering and building various prototypes. 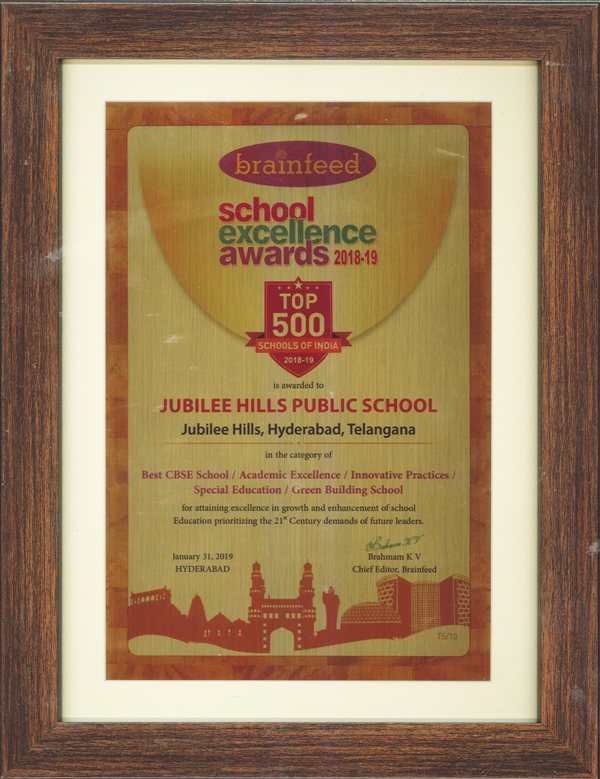 Jubilee Hills Public School added another feather in its cap when it received the Brainfeed School Excellence Award for the Academic Year 2018-19. The school has always been a leader surging ahead with its motto ‘Tradition and Technology’, providing the best to its students and making an impact in the field.

Jubilee Hills Public School has proved itself to be the leader in Education once again when Ms. G. Sree Devi, the Academic Director received the “Teaching Excellence Award” as a “Star Educator for Special Contribution in School Education” by The Progressive Teacher Magazine on 1st Sep 2018 at New Delhi.

Education had been teacher centric earlier where the teacher taught what she wanted. Now the world has changed, the student has become the apex of the triangle, while the teacher and the parent have become the vertices who work together for the betterment of the child. The teacher has become more of a facilitator who guides, motivates and hand holds the student and leads him to success. Jubilee Hills Public School has been moving ahead with times, continuously and tirelessly working to improve the pedagogy and how it is delivered.